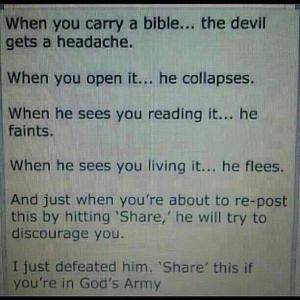 A young friend of mine posted this panel on Facebook today. I very much appreciate the Christian spirit in which it was shared, but I would like to devote a teaching moment to it. I believe that Satan is real, and I take him very, very seriously; but too many Christians have a superstitious and legendary understanding of his nature!

Satan is not God! His is an angel. A very powerful and evil angel indeed, but a mere angel, created by God in the same way that God created all the other angels. Angels are not human, but as created beings they are much closer to man than to God!

Angels are spirit beings. Meaning that in their natural form they have no material bodies to encumber them. That implies to me that they can probably travel very fast, but still they can be only one place at a time. Nothing in Scripture implies that they are omnipresent–everywhere at once–like God is. Nor are they omniscient–they don’t know everything that’s happening in the universe. True, there are a lot of demons–fallen angels like Satan. These demons may be able to communicate with their leader, Satan, very quickly, so he may have a good idea of what is going on in the world. But he isn’t God! He certainly can’t process all that information at once!

In fact, I doubt that Satan pays all that much attention to individuals, unless one has a particular strategic value to him. If I open a Bible, or read it, or live it, or share it, I doubt that Satan would ever know it. Or care about it, except in the general sense that he hates all Godliness. There might be a demon hanging around me, but he would have no power over me, because I am protected by the Holy Spirit.

Okay, for the sake of argument, let’s say that Satan happened to be hovering right beside me when I do these things. Headaches, collapsing and fainting are hard to imagine of a spirit being with no head to ache and no body to collapse or faint. But that’s okay, God Himself is frequently spoken of in Scripture in anthropomorphic language, to stress a point. Fleeing is certainly possible, and even mentioned Biblicaly. How about discouragement? Yes, I can go with that, too. Satan is described as a deceiver, and there are examples in scripture of Satan deceiving and discouraging individuals. Eve, with Adam no doubt listening in, being a case in point.

Now this brings me to the bottom line that I wanted to talk about all along: If Satan doesn’t really know or even care what I’m doing, then why do I sin? Yes, I’m sorry to say, I do on occasion sin. No tattling please, I’m telling you that in confidence! Don’t people sin because Satan, the Devil, puts the idea into their heads?

In general, no! Emphatically! Occasionally he does–back to Adam and Eve again–but for the most part when I sin, the idea of committing that sin originates full-blown in the depths of my own fallen mind! Adam was created without that propensity to sin, so the idea of disobeying God had to come from the Serpent, but once he ate the fruit of the tree, he and all his descendants gained the “sin nature” that so dominates all of mankind.

Jesus was born a human, but without the sin nature. He was just like Adam when Adam was created. That’s how He managed to grow to adulthood without ever committing sin. Then, in the Wilderness, Satan attempted to deceive and tempt Jesus, in just exactly the same way he did Adam and Eve. But Jesus resisted the temptation, remaining pure until His crucifixion. That is why He was qualified to pay our sin debt and offer salvation to sinners.